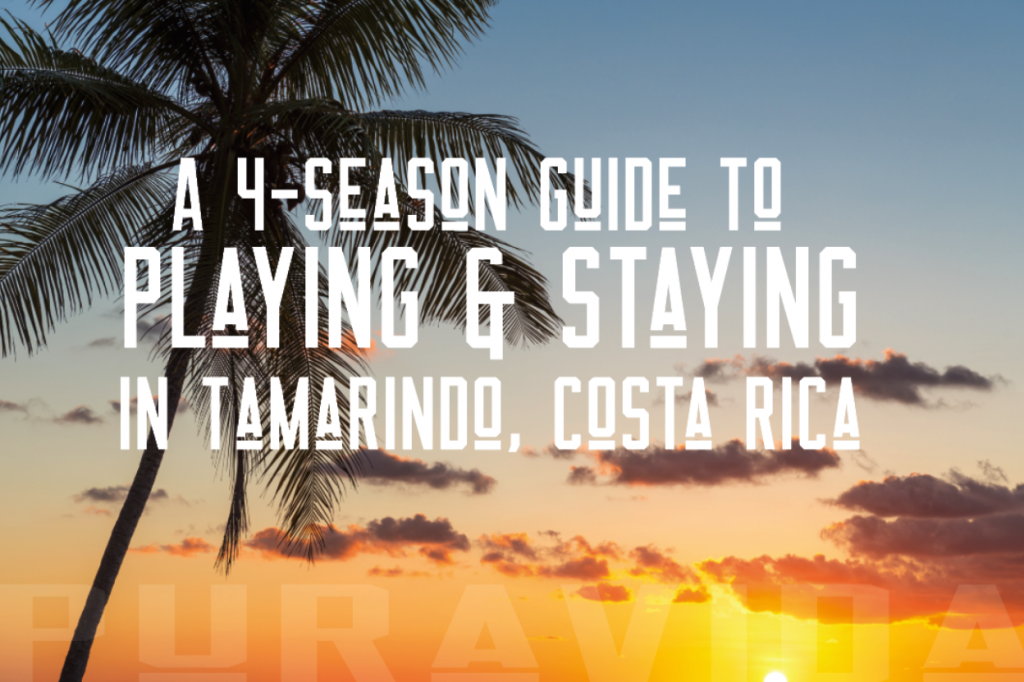 A 4-season guide to playing and staying in Tamarindo, Costa Rica

With its scenic, sultry coastlines, Tamarindo, Costa Rica beckons travelers all year round. It’s a little piece of paradise straddling the Pacific Ocean and positioned in the most southern reaches of North America. It’s exotic location can make understanding the seasons somewhat puzzling, making it hard to decipher the best time to go to Tamarindo.

Yet, when broken down into a 4-season guide, the tropical seasons of Tamarindo are far easier to comprehend. For starters, and without splitting hairs, the country really only has two seasons (per year) rather than four found in cooler climates. In the simplest of terms, Costa Rica’s seasons are either dry (for 10 months) or rainy (for 2 months).

For the purpose of vacation planning, we’ll break it down based on the seasons of the Northern Hemisphere (winter, spring, summer, and fall).

Let’s start off with what’s considered winter in the Northern Hemisphere; December to March. While it is cold and dreary in the USA, Canada, Europe, and the UK, it’s high summer in Latin America. And as for Tamarindo, located on the Northwest Pacific coast of Costa Rica, this season boasts both the best beach weather and the best festivals of the year.

Hence, December and January are arguably the best time to visit Costa Rica with cloudless skies, verdant landscapes, and a plethora of things to do. The Costa Rican summer continues through February, March, and April, making it an ideal destination for Spring Break and Easter holidays, too.

Invariably, these are the peak tourism months, when hotels and tours are the most expensive and the beaches are bustling. One of the best ways to stay longer for less is to opt for a vacation rental rather than a hotel. They are quite popular and affordable in and around Tamarindo.

Beyond beach bumming and water sports, Tamarindo is a lively, culturally rich destination with lots of exciting things to do, so plan for the following:

April through June are shoulder months between the dry and rainy seasons, proving a great time to book a trip to Costa Rica. April brings up the end of the tourism peak and the first sporadic showers of the rainy season. By early May, vacancies are wide open, pricing is dropping, and the charm of rural, coastal living returns. Towards the end of May and throughout June, daylight activities become dictated by the rains via brilliant, sunny mornings and reliably drizzly afternoons.

There’s still plenty of opportunities to explore the beach and sea in April, May, and June. But, in your downtime, duck into some of these fascinating, local festivities:

What to do in Tamarindo, Costa Rica, from July and August

While it’s hot and steamy in the Northern Hemisphere, Costa Rica spends the grey days of July and August greening up with steady, daily rainfall. But, despite the rain, it can prove a secretly fantastic time to book a trip to Tamarindo because the region usually enjoys “Veranillo,” something akin to an Indian Summer, sometime during these months. It’s a pocket of time, lasting for several weeks, when the rains stop and summer seems to reappear magically, only to be followed by the true depths of the rainy season come September.

If you do decide to take a chance on these less popular travel months, you’ll be rewarded with a slew of fascinating cultural celebrations.

What to do in Tamarindo: July & August

Rain or shine, there’s plenty to do in Tamarindo, even in July and August, when the rainy season starts taking over. Aim your off-season stay around these noteworthy Costa Rican festivals and Tamarindo holidays:

September and October are among the wettest months of the year in Costa Rica. As a result, especially in Tamarindo, many hotels and tourism entities are shut down entirely. However, it’s also the time of year when ocean swells exhibit their biggest, best, and most frequent swells. And it’s not as rainy as you might think.

The average monthly rainfall is around 20 inches a month (significantly less than the South Pacific and Rainforest regions of Costa Rica), and temperatures remain between 70-90 degrees Fahrenheit.

So, if you don’t mind surfing in intermittent rain, you can find outstanding deals to stay at a vacation rental in or around Tamarindo. Plus, a little rain doesn’t stop the festivities, and there is still plenty to do during the Costa Rican winter.

What to do in Tamarindo Rainy Season: September through October

The rainy season might seem like an excellent time to hole up and write a book in Tamarindo, but it’s also an epic season for getting to know the cultural side of Costa Rica:

Now that you know when to visit Costa Rica and what to do in the different seasons let us give you a hand in finding an idyllic Tamarindo vacation rental. Just send us a message, and we will set you off in the right direction!