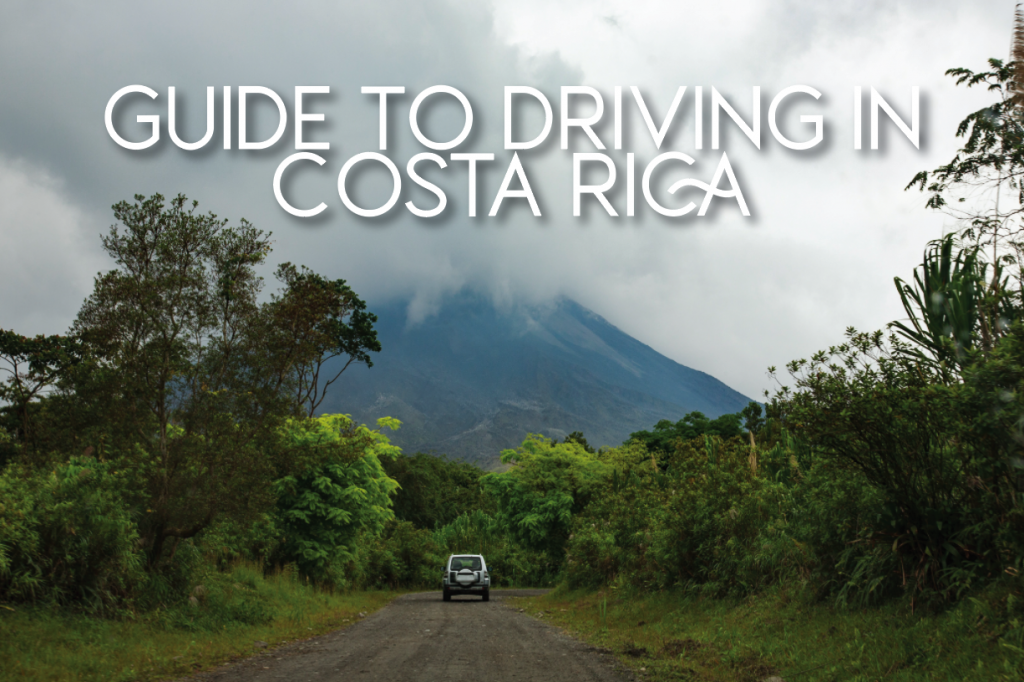 The Do’s & Don’ts of driving in Costa Rica

With its lush rainforests, idyllic beaches, rich natural history, and charming small towns, Costa Rica is an explorer’s paradise. It’s no wonder that so many people come here on vacation every year. For many planning a trip to Costa Rica, renting a car is a great way to explore all that this beautiful country has to offer. But before you hit the road, there are a few things you need to know about driving in Costa Rica.

In Costa Rica, drivers must wear seat belts, and children under 12 must ride in child safety seats. Drivers must use headlights during daylight hours and turn signals are required at intersections.

The listed legal driving age in Costa Rica is 18 years old. However, the minimum age requirement to rent a car from most agencies is 21-23 years old.

Don’t: Drinking and driving is a bad idea! It is illegal to drink alcohol while driving. Also, the legal blood alcohol limit in Costa Rica is 0.75% which is lower than the United States limit of 0.8%.

Do: If you plan on drinking, be sure to have a designated driver or take public transportation. Just one drink can put you over the limit.

You must carry a valid driver’s license from your home country unless you are under 18 years old. You must also present a valid passport or national ID card.

If you do not have a driver’s license for your country of residence, you must obtain a license from the Ministry of Public Works and Transport (MOPT ). To apply for a license, you must go to the MOPT  office closest to where you live.

Driving in costa Rica can be a bit different than driving in other countries. For one, the speed limit on the highway is 90 Km/h, which is about 55 mph. In urban areas, the speed limit is usually 50 Km/h, or about 30 mph.

When it comes to getting speeding tickets, be aware that speeding fines start at $100 and increase with each infraction. Driving without insurance is punishable by imprisonment.

Do: If you’re planning on driving in Costa Rica, be sure to check and follow the speed limit signs on the rural roads before hitting the road.

Costa Rica’s topography is as diverse and interesting to explore for those who are willing. From lofty mountains, low visibility clouds, or flatlands- there’s something in this country that will suit anyone! However, with so much beauty comes to some challenges.

There are also a lot of animals —particularly chickens roaming around freely— on the roads in Costa Rica. This means that you need to be extra careful when driving, as you never know when one might dart out into the road. Take it slow and always be on the lookout for animals!

Do: Download an offline map app before you go. Offline maps use your phone’s GPS tracking even when you don’t have cell service so you can always find your way. Waze and Google Maps are two popular options that also provide live traffic updates.

Costa Rica has both highways and freeway systems but they don’t look anything like what you’re used to seeing in North America. In fact, many of them have only one or two lanes for a short period, while others have only one lane in either direction.

The nicest highway, Interamericana Highway 1, underwent construction a few years back and now has two lanes for both directions and is very well done. Most of the other freeway systems in Costa Rica have just one lane such as Route 27, the main route connecting San Jose to Alajuela.

Do: Carry small bills and loose change with you for tolls. Almost all highways in Costa Rica have tollbooths—often without attendants—so have cash ready to go to avoid delays. While most major credit cards are accepted at the bigger booths, having cash on hand is always best.

Costa Ricans have some unusual methods to warn motorists about hazards along the roads. People will often mark a pothole with something that is lying around, such as a piece of cardboard, a banana peel, or even a piece of wood. If the road is bumpy, locals might use a large leaf, or sometimes even a whole tree trunk, to make sure cars don’t hit anything.

Drivers in Costa Rica will also use pieces of plastic bags to indicate where the road dips into a ditch. Locals may trim a long piece of grass or plantain leaves to act as a warning if there is a particularly steep curve in the road.

The rainy season runs from May to November. During this period, it rains almost every day. Rainfall in Costa Rica varies greatly from less than ten inches per month to over 30 inches per month in the north. This rain causes many problems around the country, including washouts and landslides along roadways.

Some roads are more prone to washouts and landslides than others. For example, Route 2 between San José and San Isidro del General is one of the most dangerous routes because it passes through the Cordillera Central mountain range. Other roads that are vulnerable include Route 32 between San José and Limón and Route 27 connecting San José to Punta Arenas and Jacó.

Do: Make sure to check the weather forecast on the day of your journey. If you are driving close to Tamarindo, check our four-season guide with detailed information about the climate in Tamarindo, so be sure not to miss it!

Another thing to keep in mind is that it can be very dangerous to drive at night, so don’t drive at night if you can help it. Not only are the roads more likely to be in bad condition, but there are also fewer streetlights and it can be harder to see potential hazards. If possible, try to plan your travel so that you’re not driving at night.

The signs are similar to those used in the United States and Canada, with the exception of a few (like the red octagon for stop). They utilize the same icons, but learning the Spanish words is always beneficial. The following are some of the most frequent road signs you’ll encounter.

Do: Learn the basic signs listed above so that when they happen in your driving or someone else’s-you’ll know what to do.

The average price of gasoline in Costa Rica is about $4.75 per gallon ($1.27 per liter). This makes it one of the most expensive places in Latin America for motorists. In comparison, the cost of gasoline in the United States is around $2.70 per gallon ($0.80 per liter), according to the World Fuel Organization.

Do: Whenever you can, refuel your car. In rural areas, gas stations may be scarce, so if you’re unsure, it’s best to fill up sooner. Diesel fuel may be less common and more expensive than gasoline in Costa Rica, so make sure you know what type of car you have before driving!

If you do decide to rent a car while in Costa Rica, there are a few things you need to know. First, ensure that your rental agreement clearly states what type of insurance is included. You don’t want to be stuck with a huge bill if your rental car gets damaged!

It’s also essential to pick up your rental car as early as possible. This will give you plenty of time to get familiar with the car and get used to driving on Costa Rican roads.

What type of car should you rent?

There are three types of cars to choose from in Costa Rica: economy, compact and mid-size. Economy cars are typically smaller and cheaper, while compact and midsize cars are larger and usually pricier. If you plan on traveling around the countryside, consider getting a midsize car since most of the roads are paved and fairly well maintained. If you are traveling backroads, you’ll certainly want a 4×4 for additional peace of mind.

Costa Rican rental companies offer automatic and manual vehicles, and it seems like most people prefer automatics over manuals. But when you’re renting a vehicle, there are some things to consider. You’ll pay more money for an automatic, but it might be worth it to save yourself some trouble.

You can find a car rental to fit your needs on any budget. The price depends on how long you want the vehicle for, what type of car, and where it will be used during travel in Costa Rica – high or low season? because there are different prices depending upon the time period that one chooses to visit Costa Rica

Expect to pay $50-$100 per day for a basic economy car and for prices to fluctuate over the calendar year. For longer trips, you might save money by renting a bigger vehicle.

There are plenty of car rentals in Costa Rica, including those offered by some major brands like Enterprise, Sixt, and Hertz. However, we recommend booking your car online because it’s easier, faster, and cheaper.

The good news is there are many ways to protect yourself against accidents while traveling in Costa Rica. However, it pays to do research beforehand. For example, most companies offer collision damage waiver (CDW) insurance, but it’s usually limited to around $1,000-$2,000 per vehicle. If you’re renting a car, make sure you know what coverage options the rental agency offers and how much each option costs.

If you don’t want to carry liability insurance, there are still plenty of ways to protect yourself. Renting a 4×4 vehicle is recommended because it makes navigating those rugged roads easier. Also, consider adding optional extras like GPS navigation, satellite radio, and even a mobile phone package that includes international roaming.

You’re probably wondering where you could find cheap travel insurance. Well, it turns out there are several providers offering plans specifically designed for travelers who rent cars in Costa Rica. They include some of the ones below:

So there you have it— everything you need to know about driving in Costa Rica! Even though the conditions can be challenging at times, renting a car is definitely worth it if you want to see everything that this beautiful country has to offer. Just remember to drive carefully, watch out for animals, and avoid driving at night if possible. With a little planning and preparation, you can enjoy a safe and enjoyable drive around this beautiful country.

If you’re still looking for the perfect place to stay, take a look at our Tamarindo vacation rental listing. From beachfront condos to luxurious villas in beautiful Tamarindo, we’ve got something for everyone!

What is the driving age in costa Rica?


The driving age in Costa Rica is 18 years old, but you must be 21 years old to rent a car.

What side of the road do people drive on in Costa Rica?


In Costa Rica, like in the USA and Canada, people drive on the right side of the road.

What are the speed limits in Costa Rica?


The speed limit on highways is 100 km/h (about 62 mph), and the limit in urban areas is 50 km/h (about 31 mph). However, it’s important to note that these limits are often ignored by drivers, so it’s always best to err on the side of caution and drive a bit slower.